Nature as bridge between past, present and future

Architecture true to nature and humans 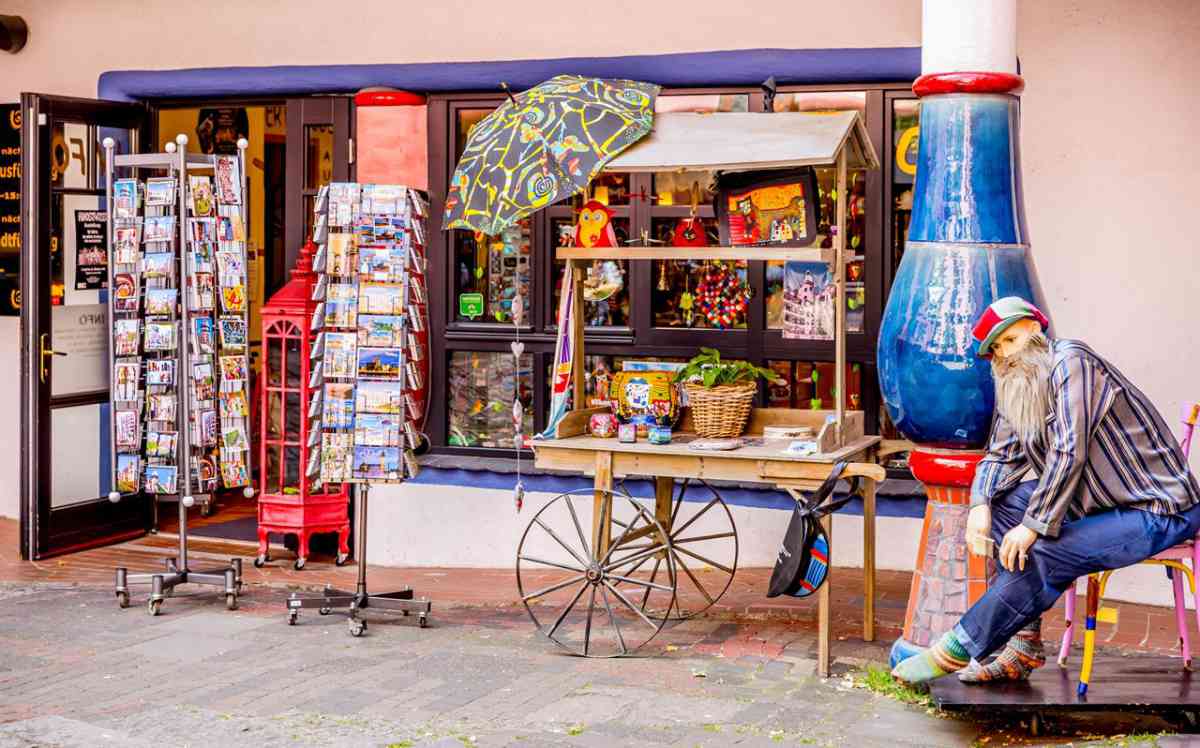 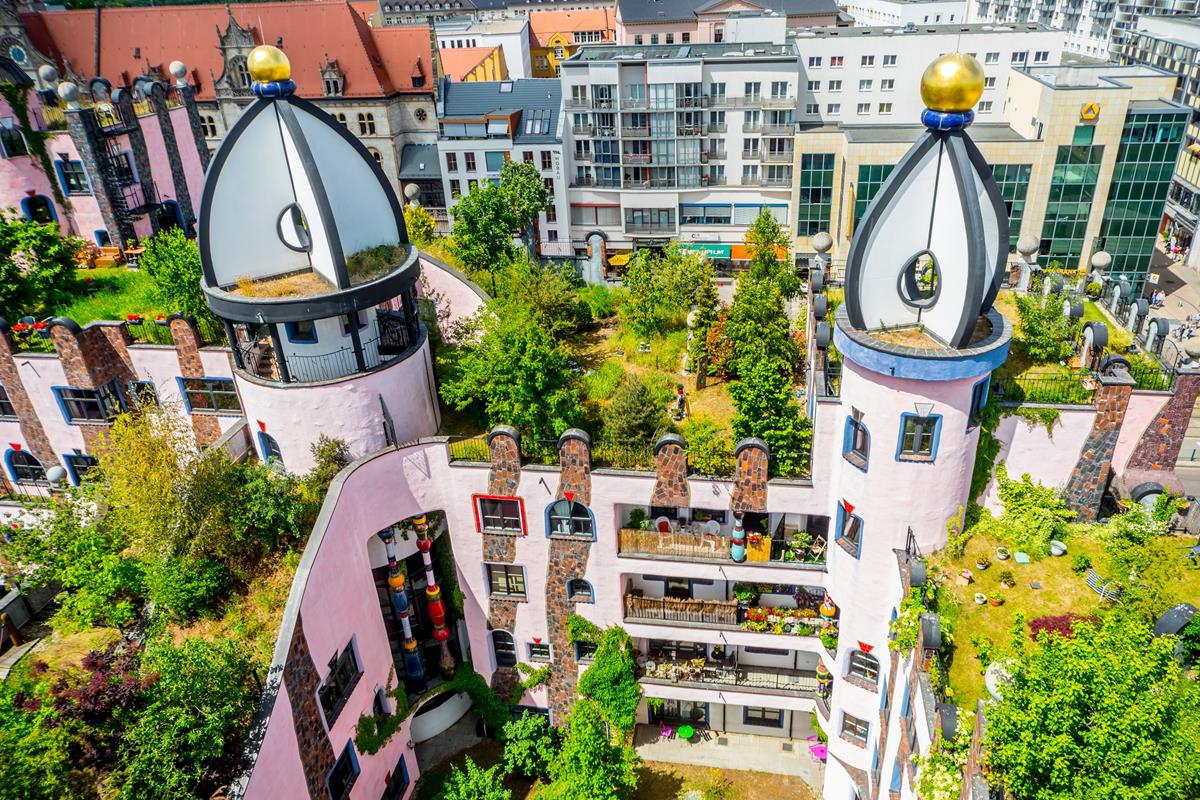 Nature, art, creation are one. We are responsible for their separation. When we violate nature’s creation, we destroy our creative spirit, we destroy ourselves. Nature alone can teach us creation and creativity. True illiteracy is an inability to be creative. Humanity’s longing for a home and a life in harmony with nature and their own creativity is immense.

The Green Citadel of Magdeburg is an extraordinary architectural work. An oasis for humanity and nature in a sea of rational buildings. It fulfills humanity’s longing for romanticism. Exactly this romanticism is negated by the deadly sterile zealousness of rational architecture. Its objective is to eliminate romanticism altogether.

The Green Citadel of Magdeburg is a building that blends perfectly into its surroundings of the cathedral square with ties to tradition and a certain sternness while at the same time being revolutionary and innovative as it points towards a future in which nature and the dreams of mankind regain significance. A building that Magdeburg will be proud of.

The Green Citadel of Magdeburg represents reconciliation, a bridge between past, present and future.

The Green Citadel of Magdeburg represents not only enrichment of our cultural heritage, but also for mankind and nature.

The Green Citadel of Magdeburg will grow like an organism. It is no aggressive, soulless block.

Architecture should elevate man and not force submission and abasement. Architecture exists to serve mankind. It should provide the security of feeling at home. It should be able to be a third skin. Our cities have descended into the concrete foolishness of architects for whom the Hippocratic Oath, that should read:

Architecture must be a living, organic entity that is in a continuous state of development and transformation. The blind and cowardly use of geometrically straight lines has turned our cities into deserts, both in a spiritual as well as an ecological sense. Some have asserted that Hundertwasser architecture is nothing but “smoke and mirrors”, “dire and inacceptable”. How then do Hundertwasser’s projects enjoy enthusiastic acceptance around the globe.

Why do millions of visitors arrive in buses from around the world to marvel at Hundertwasser’s architectural works?

Why then do all of Hundertwasser’s architectural creations work, no matter the purpose of the building. Why does an industrial building he designed achieve higher rates of productivity? Has it something to do with the fact that the industrial complex at which they work has been built with a respect for nature and humans, which in turn encourages self-confidence amongst employees who are proud to work there?

Why are tenants of Hundertwasser buildings so content with the calmer lives they lead in their acclimatized oasis in the midst of a concrete jungle?

Why are the children of Hundertwasser day care centres so much happier, more open and cheerful?

Why have the prospects for recovery increased in the hospital wing Hundertwasser designed for the University Hospital of Graz?

What his critics fail to mention:
that 20 different bird species have been counted on the forested rooftop of Vienna’s Hundertwasser building
that storks nest on the church in Bärnbach, that kestrels nest under the golden cupola of Spittelau’s district heating plant, that every year 5 duck families move into the rooftop garden of Vienna’s art gallery, until there is no more room
that tenants revel in their hammocks hanging in the shade between trees on the rooftop
that with the vegetation on the roofs, the insulation is so efficient that heating and cooling costs are reduced by two thirds
that the climate in the vicinity of a Hundertwasser building dramatically improves: the rooftop vegetation provides for a noticeable increase in oxygen, increased humidity, reduced noise and dust pollution and improved water retention
that the construction workers at Hundertwasser sites delight to be a part of a creative project and have difficulty to return to regular construction sites where they are nothing but prefabricated component slaves
that for the first time in architectural history the window right is enshrined in the rental agreement – the right of every resident to creatively embellish their in and outdoor surfaces – a right that tenants in Vienna and Plochingen exercise
that all buildings, that are not built dogmatically and without a soul but rather with love, stand together in harmony; heart and soul are reunited
that in humanely designed houses, crime, drug and suicide rates decline substantially. So much so, that Hundertwasser’s architectural projects that are at one with nature and the dreams of men are highly sought after, not only in crime control but also in crime prevention
that ever more residents prefer to spend time at home in their own rooftop forests, rather than joining the city exodus
that for the first time in 100 years, factories and non-residential buildings including warehouses, petrol stations, motorways, public toilets, district heating and waste incineration plants are being built with a respect for nature and mankind in such a way that they are inviting, almost a home away from home.

Environmental pollution that is visible is the cruellest since it sickens the human soul.

Magdeburg’s Green Citadel is a special place of relaxation and recreation and a source of delight. It aspires to rectify the anonymous, cold and inhuman modern architecture that dominates our times.

It must be the architect’s primary objective to lead mankind back to the paradise considered lost.